Searching, searching, for a better receptacle.

Curious about better notebook options and what other scientists are using, first I asked around my computational group colleagues. They generally do not use any specialised ELN either, but the usual OneNote, gDoc, pen and paper, and the likes.

Turning my queries online, I found this paper in PLoS Computational Biology <Ten Simple Rules for a Computational Biologist’s Laboratory Notebook>. Although it is more about how to document rather than what to use to document, it is helpful for oneself to identify what a lab notebook is to them. For example, do you regard your notebook to be a legal record? (You should, by the way, according to the paper). Do you want your notebook to be accessible to anyone in the world? (See open-notebook science). Another related paper you may want to check out, regarding folder structure: <A Quick Guide to Organizing Computational Biology Projects>.

I also came across this Nature article <How to pick an electronic laboratory notebook>, which from the get-go already assumes that traditional notebook is cumbersome and electronic lab notebook (ELN) is definitely the future, but there are so many ELN options – how to choose? (If you are interested, one of the references has a comprehensive list.)

I looked at the options mentioned in the article and well, I don’t know, somehow I am turned off by all the commercial options. I think the ideal ELN for science should be open-source like Jupyter notebook.

One workflow from the article resonates with me, though –

Every month, his team exports pages to PDF files and signs them electronically; the files are then moved to a directory where they cannot be changed.

I like it because it lets people to use any form of notebook they want (even pen and paper!), as long as it is exportable to PDF, and at the same time fulfilling audit requirement of timestamping and non-editability.

Version control as timestamping and more

Another thing that we should get into version control...
Image credit: PHDComics

In our case, our notebook is the source code. Indeed, there are others who have the same idea. Googling ‘git lab notebook’ gives several hits, for example this one is centred around the calendar days and lives in GitHub. (The version control software that I am familiar with is git, so I will mention git a lot.)

I shall attempt to describe the git version control workflow: You work on a project which has features A and B; you stage the changes related to feature A and commit, thus timestamping and logging it in the timeline; you do the same for feature B. Staging is precisely for this purpose, to bundle together changes in a logically-structured manner. The version control software only saves the changed files (git saves the whole file, other softwares may save only the difference), so this is a good thing, storage-wise.

In this way you would accumulate a linear collections of timepoint snapshots (branching in the timeline is possible but let’s exclude it for simplicity), in which you have a record of every change in your notebook (isn’t this like… blockchain?). Even if you go back and revert some changes you make because of a mistake for instance, that is recorded as yet another commit.

Sounds arcane? Probably to the typical (non-computational) scientists, all this sounds cumbersome to learn and get into. Even for me, typing all those obscure git commands to the terminal take sometime to get used to.

Ideally, they (I’m not sure who… kind strangers?) should make git version control more user-friendly and simpler for the user (nice GUI; and we can also skip the staging for example) and for the auditor (they can see the whole timeline and there is a slider button to quickly review all changes), and I think many would gladly use it. The weakness of this approach is, the ELN needs to be largely plain text (just like a software source code), otherwise the changes between commits may be difficult to view.

Sounds like something you would use? Well, actually that thing I described above sort of exists already. If you install Anaconda, a popular Python distribution, Visual Studio Code (VSCode) is bundled inside. VSCode is an open-source code editor, and you know what, it has git built-in. You can stage and commit away with abandon without arcane terminal commands. I would suggest keeping the notebook in the form of Markdown files, since they are plain text, although you can do .tex files equally well. It has a lot of plugins, including a git history viewer. As a bonus, I can access the Linux terminal from within (I love my bash scripts) and there is a plugin that lets you load Jupyter notebooks as well!

You can see my VSCode setup in the screenshot below: 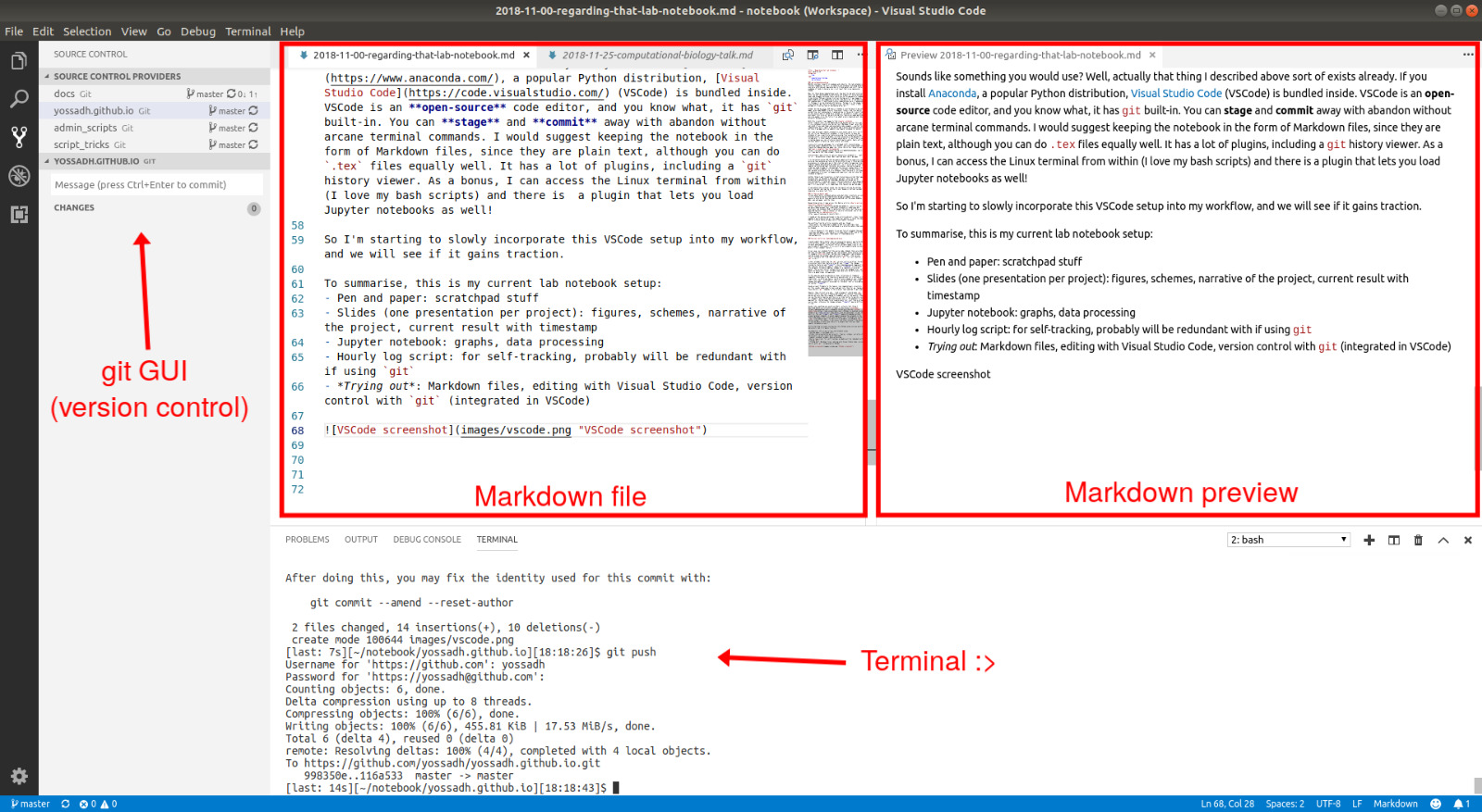 Take a closer look at the Markdown file in the screenshot… Yup, this blogpost itself is written with VSCode. Quite meta, isn’t it?

So I’m starting to slowly incorporate this VSCode setup into my workflow, and we will see if it gains traction.

To summarise, this is my current lab notebook setup:

Actually, even after brain-dumping all this notebooking stuff, I’m still a bit fuzzy about the concept. I guess, for now, my lab notebook philosophy is: track as much as possible, with least effort possible.

Your email address will not be published. Required fields are marked *

You May Also Enjoy

Others
If Someone Is Typing, Then Stops … Can I Ask Why?

Since these AIs are just giant matrix multiplication machines, “intuition” now has a firm grounding in math - just much bigger, more complicated math than the usual kind that we call “logical”.

This would be a common pattern for sciences: much worse at everyday tasks than people who do them intuitively, until it generates some surprising and powerful new technology. Democritus figured out what matter was made of in 400 BC, and it didn’t help a single person do a single useful thing with matter for the next 2000 years of followup research, and then you got the atomic bomb (I may be skipping over all of chemistry, sorry).
– What Are We Arguing About When We Argue About Rationality?

What he seeks to practice is, in a phrase popularized by the Marxist philosopher Antonio Gramsci, “pessimism of the intellect, optimism of the will.”
– Can Science Fiction Wake Us Up to Our Climate Reality?

Caulfield then introduced two different ways of thinking about how we engage with ideas when we’re on the internet: The web as a garden and the web as a stream. Think of the web as an organically developing garden: a space in which there’s no predetermined order or relationship of things to one another. Caulfield writes, “Every walk through the garden creates new paths, new meanings.” What came first in the garden doesn’t matter either. Each thing in the garden is related to the other things as it exists in the moment.
– The Faithful Gardener

Others
https://github.com/csinva/imodels
Synaesthetics
Transformative Experience and Pascal’s Wager
Do Good Doorbell Cams Make Good Neighbors?
How to Want Less
It’s Your Friends Who Break Your Heart
How to be useless
What We Don’t Want to Know
It’s Time for Some Game Theory
Why does woman have ‘man’ in it and female has the word ‘male’ in it?

Compared to 2020, I slowly regained my reading habit again. One notable book is Camus’ The Plague that I didn’t finish in 2020, but picked it up again. Nothing really stood out for me, but I would recommend the starred ones.

Humility, by contrast, admits that defeat is possible. It occupies the nebulous zone between preparedness and precaution by asking a moral question: not what we can achieve with what we have, but how we should act given that we cannot know the full consequences of our actions.
– “Preparedness” Won’t Stop the Next Pandemic

Rather than trying to beat the coronavirus one booster at a time, the country needs to do what it has always needed to do—build systems and enact policies that protect the health of entire communities, especially the most vulnerable ones. Individualism couldn’t beat Delta, it won’t beat Omicron, and it won’t beat the rest of the Greek alphabet to come. Self-interest is self-defeating, and as long as its hosts ignore that lesson, the virus will keep teaching it.
– Ed Yong | America Is Not Ready for Omicron

For instance, in Plato’s Euthyphro dialogue, Socrates runs into the local priest and expert on the gods, the self-same Euthyphro, who plans to do something unholy by the local standards – to press charges against his own father. Socrates asks how he, a man wise in the ways of the gods, could do something the gods would obviously condemn?

Euthyphro answers that, in fact, his plan passes the gods’ standards. This raises only more questions for Socrates, who presses on and asks Euthyphro to clarify what he means by holiness. If Euthyphro’s plan is so holy, surely he could explain his reasoning and spell out the nature of holiness? Under questioning, though, Euthyphro reasons himself into a corner, unable to give a clear account of holiness. The dialogue ends there, with the premier theologian of Athens excusing himself with a version of ‘I’m actually late for a thing.’
– How do you know?

Researchers from Harvard and the University of Virginia brought subjects into a lab where they had to choose between two torture devices. The first option was to push a button that would deliver a safe, but still sharply unpleasant, electric shock to themselves. Two-thirds of the men in the study chose to shock themselves despite the fact that they’d 1.) all been shocked in an earlier phase of the study, and 2.) all professed that they would pay money to avoid the unpleasant experience in the future.
– Why Stories Are Like Taking Drugs

Sigmund Freud once stated that no one believes in their own death. In the unconscious, there is a blank space where knowledge of this one sure thing about our futures should be.
– Life after death: how the pandemic has transformed our psychic landscape

Inverting the old cliché, Christopher Hitchens said, ‘Everyone has a book in them and that, in most cases, is where it should stay.’
– https://literaryreview.co.uk/have-you-considered-accountancy

Pundits have urged people to “listen to the science,” as if “the science” is a tome of facts and not an amorphous, dynamic entity, born from the collective minds of thousands of individual people who argue and disagree about data that can be interpreted in a range of ways.
– Ed Yong

In other words, “vibes” are similar to the approximations that machine learning systems use, and the two feed off of each other synergistically. The situation is precisely encapsulated by Goodhart’s Law: “When a measure becomes a target, it ceases to be a good measure.”
– Ludwig Yeetgenstein

Others
Voice above water
How to know what you really want
Reactance
‘I Would Give Anything to Hold Their Hands Again’
Review: Delia Falconeron Amitav Ghosh | A Dazzling Synthesis
Freeze en Place: How to Use Your Freezer as a “Cooking” Tool
The End of the Dinosaurs
How to rest well
How we became weekly
SMBC | Morality
Energy, and How to Get It
Bamboolib: One of the Most Useful Python Libraries You Have Ever Seen
Sci-Fi Icon Neal Stephenson Finally Takes on Global Warming
And the Walls Came Down
Composer and academic solves historical puzzle to bring the sounds of Ancient Rome to life
Spinoza’s God: Einstein believed in it, but what was it?
Kill the Travel Bug: The Case for Staying Put